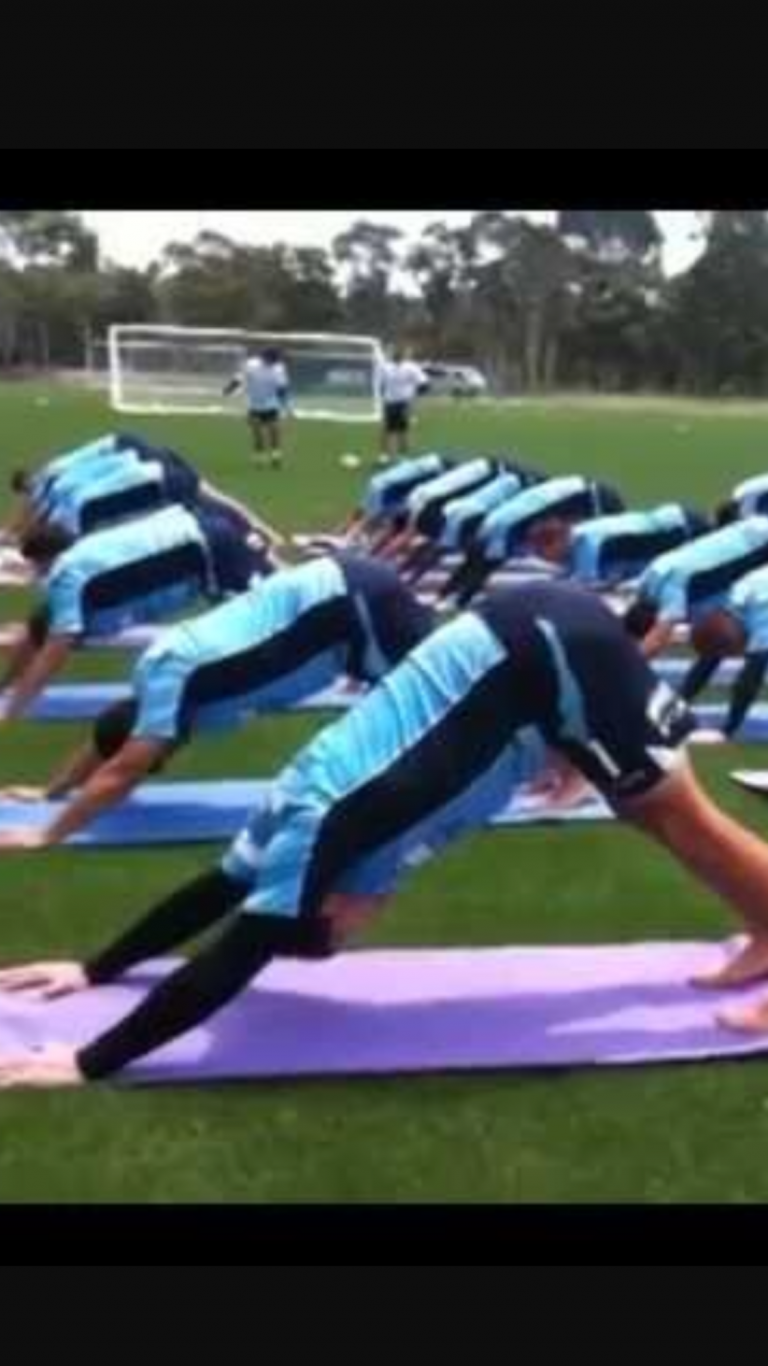 Having been a lifelong football fan particularly of my hometown team  Birmingham City Football Club I was overwhelmed and honoured in 2005 to have the opportunity to teach them!

Everyone now talks of ‘Yoga for Sport’ and there are so many teacher training courses how to teach yoga to sports persons etc.  However the history of this explosion of interest goes back  in the UK I believe to around 2003 when Irish footballer Roy Keane  the then Captain of Manchester United Football team walked into a church hall somewhere  in the Cheshire area to attend a yoga class. He was so impressed with the teachings and the fact that the average man or woman , particularly  those much older and stiffer  than he , could do all these yogasanas – whereas him being a young top athlete could not!  This got him thinking, attending regularly and then hooked ! Shortly after that Man United had Iyengar yoga at their training ground and many of the huge football stars most notably Ryan Giggs took to yoga – the rest  – as they say is history.  Giggs put his longevity in Premier League football down entirely to Yoga. He retired aged 40 years which is unheard of in the game and most of those years were  injury free. So back to Birmingham FC    – at the time Steve Bruce (ex Man United player) was our First Team Manager and it was he that gave me the opportunity to bring Iyengar Yoga to my  beloved Birmingham City FC!

The first ‘project’ I was given was to try and help a well known BCFC player who also played for the England National team. This player had been devastated with repeated hamstring tears  and disc problems and was  recommended   and did infact have  back surgery.  However since the surgery the player had not been able to train or play for BCFC and was in need of  great help.  So the club decided to give him one last shot at recovery and this is where Iyengar Yoga came in!     I applied everything I had learnt from BKS Iyengar and taught the player 3 times a week for at least 10 weeks and he practised himself too.  I took advice from Iyengar himself.   Iyengar never wavered in his support.  The player and club were delighted with the results and he came back into the first team shortly thereafter and continued  for years after with Iyengar Yoga only recently retiring  and now managing a football club in the North.  Shortly thereafter I was entrusted with teaching the whole of the first team on a weekly basis and have done so every Monday morning since. Because of the nature of football the squad is always changing so I usually don’t have the same students for more than a couple of seasons. However many many players continue with the practice after they left the club  either on their own or  even being taught yoga at a new club.  If there is an player with specific injury issues then I work with them one to one and many have visited Iyengar Yoga Birmingham for medical classes.

My main project with the first team  however is ‘injury prevention’.    Guruji Iyengar gave me great advice to teach them as you would ‘normal students’ and as in Light on Yoga but to substitute poses like paschittmottanasana and uttanasana for single leg hamstring extensions such as Supta padangustasana and utthita hasta padangusthasana  .  This has worked very well and the players say they can’t do without their yoga classes!   Guruji gave the advice to not overwork the players and also to understand the need to rest and recover after games.  Many think that because they are young fit sportsmen with the world at their feet ( literally!) that you can ‘work them hard’- but because of his experience Guruji knew the balance required for these players between body, mind, spirit.   As a teacher of yoga to these players one also has to deal with psychological dejection for instance if they lose games  – or to use footballing terminology ‘ if their head goes down’.   So one has to consider the whole human being – just as we do when teaching in regular classes. To me this is the fascination of teaching Iyengar Yoga, how the practice is uplifting on so many levels.  Inner strength focus, courage, determination is required particularly in  big, crucial games and local derbys with our ‘friends’ across the city in Aston( AVFC!). !! As I said earlier  – now Yoga for Sport ‘ is everywhere!  I like to think that along with Roy Keane & Ryan Giggs –  BCFC played a big part in that .  The pioneer of course was BKS Iyengar who taught the Indian Cricket Team and notably Sachin Tendulkar for many years including many other sports men and women.  His book ‘Yoga for Sport’ is an amazing detailed reference  book and I use it every Monday morning at the training ground!