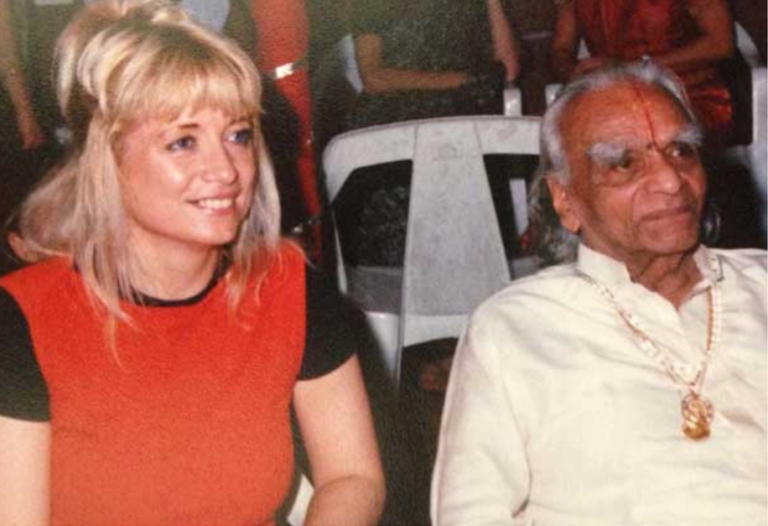 The following was written by Anna Locke and published on brumyodo.org.uk/news/death-over-yoga/ Thank you to Anna for sharing her knowledge and experience with us and for allowing us to share the post.

Jayne Orton, an advanced yoga teacher (pictured above with B.K.S. Iyengar) and co-director of the Birmingham Iyengar Yoga Institute in Acock’s Green, and BrumYODO member Anna Lock recently co-hosted a yoga philosophy evening for yoga students to explore how death in a modern, medicalised society and the yogic philosophy intertwine. A kind of yoga orientated Death Café.

Contemplation of death within yoga practice has a long history. The father of Yoga Patanjali in the 5th century B.C. India wrote the Yoga Sutras which informed the development of the many diverse branches of yoga. Jayne singled out a Sutra which chimes with modern attitude to death and shows how death is recognised within yoga philosophy to be a deep rooted fear: ‘ the fear of death is strong in everyone – even the wise’.

During the session there was exploration of how for yoga practitioners during a class their own mortality can be highlighted as a challenging pose takes them away from everyday concerns and into the present moment, or explicitly during the final pose of a practice ‘Savasana’ otherwise known as corpse pose is a vivid reminder of our shared destiny. Long standing students described observing through yoga practice their physical and mental changes as they age, which allowed a deeper understanding of their bodies and to then make adjustments to live life as well as possible whilst understanding that change is inevitable.

They reflected on the role of faith and cultural attitudes to death and dying through time, drawing on Anna’s professional life as a palliative care doctor and BrumYODO member, as well as individual’s own experiences of loss and their hopes for future conversations with people they love.

The event’s conversation is summarised well by B.K.S.Iyengar, one of the world’s leading yoga teachers who in his book Light on Life, written in his 80’s, said:

“I am old, and death inevitably approaches. But both birth and death are beyond the will of a human being. They are not my domain. I do not think about it. Yoga has taught me to think of only working to live a useful life. The complexity of the life of the mind comes to an end at death, with all its sadness
and happiness. If one is already free from that complexity, death comes naturally and smoothly. If you live holistically at every moment, as yoga teaches, even the ego is annihilated, I will not say. “ Die before you die”. I would rather say “Live before you die, so that death is also a lively celebration”.